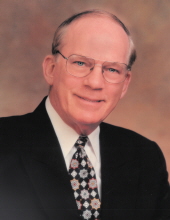 Roderick A. Chambers, age 84, of Plymouth, passed away peacefully surrounded by his family on February 1, 2020. He was born in Cleveland, OH on October 14, 1935, son of the late Robert and Jeannette (Hungerford) Chambers. In 1941, at the age of 6, Rod moved to Brooklyn, NY along with his mom and brother to live with relatives as his father was called to Active duty for WWII. When Rod was 17 years old, he joined the U.S. Navy. He was stationed at Corpus Christy, TX where he met his first wife Carol. They married in August of 1955 in Kiel, WI. They had 4 children together. They both went on to serve in the Navy and finally to move back to Wisconsin. On August 14, 1971, Rod married his wife of 48 years, Jeanne (Bredesen) Chambers. They spent their life together mostly in Sheboygan. They lived in Summerfield, FL for 13 years, returning to the Sheboygan area in 2017.Rod's first job was at Plastics Engineering in Sheboygan. At this time, he found his love of politics and later would be twice elected as chairman of the Republican Party in Sheboygan. His passion for politics led him to meet many important political leaders. It also made for great conversations around the dinner table.Rod's next chapter was his long career in Real Estate. At the age of 38 he was elected President of the Sheboygan Board of Realtors. Later that year he was named Realtor of the year. This led him to start his own business, Chambers Realty.In the 80s Rod started working for Ametek Filtration Company where he was a National Sales Manager. He loved this job as it allowed him to embrace his passion for travel. He was able to visit many places around the country and the world.Rod was an active member of his church and many clubs such as the Elk's club, Kiwanis club, and the Jaycees. He also served on the mayor's Sister-City committee in which he and his wife, Jeanne, traveled to Rivas, Nicaragua as "goodwill ambassadors" to establish a sister-city and student exchange between Sheboygan and Rivas. While in Florida, he was very involved with the Lion's club. This earned him the highest award, The Melvin Jones Fellow award for Dedicated Humanitarian Services. Among Roderick's greatest accomplishment was his 49 years of sobriety. Over the last 49 years as a sponsor and advisor he helped to save lives and impacted many that suffered from the disease.Rod was passionate about many things including politics, classical music, classic cars, reading, travel, the Packers and Brewers. But he was most passionate about his family. He continued to tell them on a daily basis how much he loved them.Roderick is survived by his wife, Jeanne A. Chambers, daughters Lori (Dick) Weinhold, Jayne (Rodney) Dragan, and Marsha (James) Bauer, daughter in law, Trudy Chambers and step son, Jerry (Mary) Bredesen; his grandchildren, Melissa (Brandon) Lis, Tyler (Lindsy) Chambers, Zach Chambers, Austin (Toni) Chambers, Mason Chambers, Deanna Dragan, Danielle (fiancée Dwight Frazier) Dragan, Sam and Lindsay Bauer, Nichole Bredesen; great grandchildren, Anthony, Pressley, Nolan and Henry Lis, Owen and Gabriel Hildebrand, Carson and Charlotte Chambers and Ella and Isabelle Chambers; and special family friend, Diane Marmes.He is preceded in death by his parents, Robert and Jeannette Chambers, his brother, Robert Chambers, his beloved son, Robert (Jay) Chambers and infant daughter Lana Jane Chambers.Funeral service for Rod will be at 1:00 pm on Tuesday, February 11 at Wenig Funeral Home, 711 Broadway, Sheboygan Falls, WI. Visitation will begin at 11:00 am at the funeral home up until the time of the 1:00 pm service. Entombment will take place at Greenlawn Memorial Park in Sheboygan. The family would like to say a special thanks to the staff at Rocky Knoll Health care center, the staff at Sheboygan Memorial Hospital and the staff at Aurora Hospice. Rod had a great fondness for all of you. He was a people person and each of you touched his life. For online condolences and additional information please visit www.wenigfh.com .The Wenig Funeral Home of Sheboygan Falls (920-467-3431) is serving the Chambers family with arrangements.

To order memorial trees or send flowers to the family in memory of Roderick Chambers, please visit our flower store.