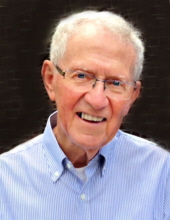 On June 5, 2019, with family by his side, Roland J. Dirkse, 87, was taken home to be with his faithful Lord and Savior. Roland was born on May 15, 1932 on the family farm in the Town of Holland to Wilbert and Evelyn (Liezen) Dirkse.Rollie walked along Sauk Trail Road to Lake View Grade School where he was #1 in his class (of one) and graduated from Oostburg High School in 1950. He enlisted in the U.S. Navy during the Korean Conflict, when he maintained aircraft radios & radar at Glenview NAS and Atsugi NAS, Japan. Following his honorable discharge in 1955 he was a draftsman for Kohler Co. before deciding to put his electronics training to good use as a Customer Service Engineer for IBM. For the next 29 years Roland repaired computers-the kind that still filled a whole room-and he was recognized several times for his professional service to customers.Despite advancing Alzheimer's, Rollie still recalled the Thanksgiving night when, as a sailor home on leave, he met a nurse from Cedar Grove at a roller-skating party. After a long-distance courtship he was united in marriage to Eunice L. Arentsen on November 26, 1954 at the Hingham Reformed Church. They shared over 62 years together before her death on March 6, 2017. Family was of utmost importance to Rollie & Eunice, especially their 6 children and their spouses, 20 grandchildren and 23 great-grandchildren. When family gathered, Dad warmly welcomed everyone; he most enjoyed sitting back, watching the generations mingle, and with humble gratitude experiencing the entire clan truly enjoy each other's company.Dad was always ready to tackle home improvement projects, often at the homes of his children. Visits to family meant packing the toolbox-and sometimes an unexpected extra trip to the hardware store. In later years Rollie was blessed to share his talents through disaster relief efforts, Operation Mobilization and the Sheboygan Christian Good-as-New Shop.Together the Dirkses were able to travel to all 50 states and abroad. They enjoyed opportunities to meet people and explore God's world through volunteering, bus tours and Elderhostels. Whether it was learning about history, machinery or a community, Roland loved to learn, which he frequently followed with a favored expression "That was interesting".Roland had an enduring faith in Christ, strengthened by daily devotions and prayer modeled and shared with family. He was a lifelong member of Oostburg First Christian Reformed Church (serving as elder, deacon, treasurer & clerk); treasurer of Classis Wisconsin; and secretary, president and treasurer of the Oostburg Christian School Board. He was able to give back to his community and neighbors through work with Oostburg Kiwanis, Sheboygan County Historical Research Center and Disaster Response Services of World Renew.Surviving Roland are his six children: Emily (Joel) Dolfin of Hingham; James (Lynn) of Leavenworth, KS; David (Malinda) of Downers Grove, IL; Sharon (Paul) Sterenberg of Elmhurst, IL; Steven (Patricia) of Vienna, VA; and Paul (Patty) of Sheboygan.He is also survived by his grandchildren: Ben (Jamie) Dolfin, Tim (Janell) Dolfin, Amanda (Jason) Eiring; Leah (Travis) Stephen, Nicholas Dirkse; Amy (Tim) Ahlenius, Michael (Lauren) Dirkse, Rebecca (Kenny) Huber, Katie (John) Boss, Jessica (fiancé Matt Robinson) and Sarah Dirkse; Micah, Matt (Sarah) and Jared (Lauren) Sterenberg; Annika, Elise, Michelle and Valerie Dirkse; Hannah and Andrew Dirkse; and 23 great-grandchildren (plus 1 expected in August). Roland is also survived by his sister Carol (Wayne) Sandee and sisters-in-law Helen, Donna & Jan Arentsen, and many nieces, nephews and friends.Roland was preceded in death by a stillborn son and daughter; a granddaughter, Laura Dirkse; sister Lenore (Alvin) Mulder; brothers-in-law Reuben (Elvira), Irwin (Margaret), Howard, Marvin & Alan Arentsen.Funeral services will be held on Saturday, June 15 at 11:00 am at the Oostburg First Christian Reformed Church with Pastor Drew Zylstra officiating. A time of visitation with the family will take place on Friday, June 14 from 4-7pm at the Wenig Funeral Home in Oostburg and at the church on Saturday at 10:00 am. As Alzheimer's tightened its grip on Rollie's mind and body he was blessed to receive assistance from many, especially the caring staff at Pine Haven, which he and his family truly appreciated. A memorial fund has been established for Oostburg Christian School and World Renew (disaster relief).

To order memorial trees or send flowers to the family in memory of Roland Dirkse, please visit our flower store.