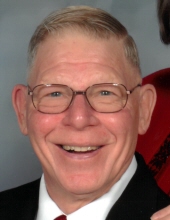 Ronald Kampmann, 86, of Sheboygan Falls, passed away on Friday, September 13, 2019, at Pine Haven Christian Home.Ronald was born on August 20, 1933, in Sheboygan, WI to Arthur and Marie (Jacobs) Kampmann. He graduated from Sheboygan Falls High School in 1951. He served in the United States Army from 1956 to1958 and in the National Guard from 1958 to 1960.On June 24, 1972, Ronald married Lavern "Dolly" Thiel at Ebenezer Lutheran Church. Ronald was employed at Kohler Company for 46 years until his retirement in 1997. He started in the iron foundry, then the generator division, and finished the final 15 years of his career as a Class I Inspector. Ronald was also a member of the Kohler Company Quarter Century Club.He was a lifelong member of Blessed Trinity Parish in Sheboygan Falls. Ronald was active as an usher and he was an Extraordinary Minister who distributed communion at church and to the homebound.Family was everything to Ronald. He and Dolly took many trips to Madison to watch their son play football and never missed family events. Ronald loved spending time with his granddaughters. He was passionate about basketball and enjoyed playing in the Tri-County league and Kohler shop league. In his free time, Ron enjoyed his vegetable garden and playing sheepshead with friends.Ronald is survived by his wife, Dolly; son, Kevin (Melissa) Kampmann; two granddaughters, Makenna and Brynn; and brother-in-law, Cletus Plate.Ronald was preceded in death by his parents; brother, Robert (Corrine) Kampmann; sister, Karen Plate; and in-laws, Herbert and Elenora (Hintz) Thiel. A funeral service to celebrate Ronald's life will be held on Thursday, September 19, 2019, at 11:00 at Blessed Trinity Parish in Sheboygan Falls with Rev. Joseph Dominic officiating. A burial will take place at Sheboygan Falls Cemetery in Sheboygan Falls.Relatives and friends may greet the family at Blessed Trinity Parish in Sheboygan Falls on Thursday, September 19, 2019 from 9:30 am until the time of service at 11:00 am. Ron's family would like to thank the staff at Pine Haven Christian Home for their dedicated care and service.A memorial fund is being established in his name.For online condolences and additional information please visit www.wenigfh.com. The Wenig Funeral Home of Sheboygan Falls (920-467-3431) is serving the Kampmann family with arrangements.

To order memorial trees or send flowers to the family in memory of Ronald Kampmann, please visit our flower store.