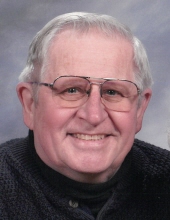 Ronald H. Rach, 84, passed away Friday, February 12, 2021 at Pine Haven Covenant Home in Sheboygan Falls.  Ronald was born June 27, 1936, the son of Hugo and Minnie (nee Nadler) Rach.  He graduated from Kiel High School in 1954, and went on to serve his country in the United States Army. On October 12, 1957, he was united in marriage with Dolores Diefenthaler at St. Peter and Paul Church in Kiel. In 2007, they celebrated their 50th wedding anniversary. Dolores preceded him in death in 2010. For 42 ½ years, Ronald worked at Kohler Engine Finishing Department where he was on the paint line. He was a proud member of the Quarter Century Club as well as the UAW.  Ron was a member of St. John the Evangelist Catholic Church in Kohler, where he served on various committees, and volunteered in countless other capacities including landscaping and office work.  He also belonged to the American Legion Post #149 and KPAL, and volunteered at St. Nicholas Hospital.  Ron enjoyed taking his family camping when his children were young, and in later years traveling the country and the world with Dolores. He enjoyed playing cards with friends and co-workers. Ron is survived by his daughter Debbie (Dick) Gordon of Sheboygan and four sons: David (Shari) of Janesville, Kenneth (Terri) of Burlington, Randall (Stephenie) of Whitefish Bay and Kevin of Sheboygan. He is further survived by six grandchildren: Melissa Balistreri, Aaron Rach, Jenna Rach, Caitlin (Jake) Gronholz, Natalie (Nick) Seib and Samantha Rach; three step-grandchildren, Melissa (Steve) Kuchinski, Jason (Christine) Gordon, Adam (Fiance Robyn Martheze) Gordon; one great-granddaughter, Ava Rose Balistreri; step-great-grandchildren; brothers and sisters: Arlene (Harold) Schuessler, Margie Sass, Rose (Ambrose) Stephany, Marvin (Chris) Rach and Jerry Rach; sister-in-law Sylvia Ramminger; brother-in-law Ralph Diefenthaler; nieces, nephews, other relatives and many friends.   He is preceded in death by his parents, his wife Dolores, sisters Donna Diefenthaler and Bernice (Ernie) Kohlman, brother Charlie Rach, sister-in-law LaVonne Rach and brother-in-law Wally Ramminger.  A Mass of Christian Burial will be celebrated at 1:00PM on Tuesday, February 16, 2021 at St. John the Evangelist Catholic Church with Rev. Joseph Dominic officiating. Masks and social distancing are required. Those unable to attend can view a livestream at www.wenig.live/RonRach . Entombment will be in the Garden of Peace Mausoleum, Greenlawn Memorial Park in the Town of Sheboygan. The family will receive visitors at the church on Tuesday from 12:00PM until the time of mass. In lieu of flowers, Ron's family suggests that memorials be directed to the American Legion Post #149 or Sharon S. Richardson Community Hospice in Ronald's name. The family would like to thank the staffs of Pine Haven and Sharon S. Richardson Community Hospice for their compassionate and loving care. For online condolences and more information, please visit www.wenigfuneralhome.comThe staff of Wenig Funeral Home in Sheboygan Falls (920-467-3431) is assisting Ron's family with arrangements.

To order memorial trees or send flowers to the family in memory of Ronald Rach, please visit our flower store.