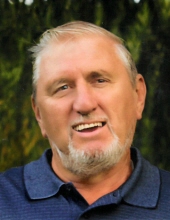 Rudolph Arthur Titel, 72, of Sheboygan Falls, passed away on Thursday, August 23, 2018 at his home after a lengthy illness. Rudolph was born on July 11, 1946, in Greenbush, WI, to Doris Titel Gustafson and raised by Doris and Step-father, Edwin. He was a graduate of Florence High School in 1965. Rudy served in the United States Air Force from 1966 to 1970 and deployed to Vietnam. Rudy was an active member of the Sheboygan Falls American Legion Post 149.On December 30, 1970, Rudy married Sue Christenson in Sheboygan. Rudy was employed at Gilson/Lawnboy for 20 years and Bemis Mfg. until the time of his retirement in 2008. During his free time, Rudy liked to visit his friends, Gary, Jerry, Wayne, Bob, and the owners and staff at River Park Restaurant for his morning coffee. Rudy also enjoyed attending his grandchildren's school and sporting events as well as camping at various campgrounds and sitting with his dog, Charlie.Rudy is survived by his wife of 47 years, Sue Titel; three daughters, Tammy (Scott) Walsh, Sherry (Dale) Colberg, both of Sheboygan Falls, Wendy (Doug) Sass of Plymouth; six grandchildren, Trevor Hittman, Abigail (Jacob) Hittman, Kalin and Reece Colberg, Peyton and Dylon Sass; one step-grandchild, Tera (Mike) Baumler; three step-great-grandchildren; Hana, Dakoda, and Bentley; one sister, Charlotte (Jim) Hawley of Goodman, WI; a sister-in-law, Debbie (Jim) Schaller; and a brother-in-law, Dale (Bonnie) Christenson, both of Sheboygan Falls. He is further survived by nieces and nephews, Shirley, Allen, Sheila, and his closest nephews, Ryan and Travis ("The Boys").Rudy was preceded in death by his mother Doris and Stepfather, Edwin Gustafson; three Grandchildren, Triplets, Teagan, Kiley, and Chase Colberg; father-in-law, Gene Christenson; mother-in-law, Betty Christenson; and other family and friends.A memorial service to celebrate Rudy's life will be held on Thursday, August 30, 2018, at 4 p.m. at the Wenig Funeral Homes in Sheboygan Falls. Military honors and an inurnment will take place at Sheboygan Falls Cemetery. Relatives and friends may greet the family at the funeral home on Thursday from 2 p.m. until the time of service at 4 p.m. Rudy's family would like to thank Dr. Matthews and his staff, Dr. Wolfert, Dr. Hollingsworth, Sharon S. Richardson Community Hospice, and St. Nicholas Hospital for their care during Rudy's illness.For online condolences and additional information please visit www.wenigfh.com. The Wenig Funeral Home of Sheboygan Falls (920-467-3431) is serving the Titel family with arrangements.

To order memorial trees or send flowers to the family in memory of Rudy Titel, please visit our flower store.