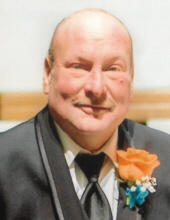 Scott Bryan Freitag, 57, of Sheboygan Falls, passed away peacefully on his birthday, September 22, 2020, at his home with his family by his side after a short battle with cancer. Scott was born on September 22, 1963, to Paul & Janet (Schmidt) Freitag in SanDiego, CA and later graduated from Howard Grove High School in 1982. On August 26, 1989, Scott married his best friend, Cathleen Young in Sheboygan. He worked at various companies through the years and was recently employed at Festival Foods where he finally found his niche working with people. He was a passionate hunter and fisherman, an avid Wisconsin sports fan and enjoyed cooking. Above all, he enjoyed spending time with his beloved family and friends. He is survived by his loving wife of 31 years, Cathy Freitag of Sheboygan Falls; daughter, Megan (Andrew) Hameister of Sheboygan Falls; son, Matthew Freitag of Fon du Lac; sister, Julie (Jeffrey) Platz of Sheboygan; sisters-inlaw, Carol (Craig) Korff of Sheboygan Falls, Chris (Mike) Debbink of Mequon; and a brother-in-law, Roy (Chris) Kalmerton of Beaver Dam. He was preceded in death by his parents, parents-in-law, Richard & Betty Young; and sister-in-law, Cindy Kalmerton. Viewing and visitation will take place at the Wenig Funeral Home of Sheboygan Falls on Friday, September 25, 2020 from 3:00 pm until 5:00 pm. Your cooperation in wearing a mask and keeping a social distance are appreciated. The Wenig Funeral Home of Sheboygan Falls (920-467-3431) is serving the family with arrangements.

To order memorial trees or send flowers to the family in memory of Scott Freitag, please visit our flower store.