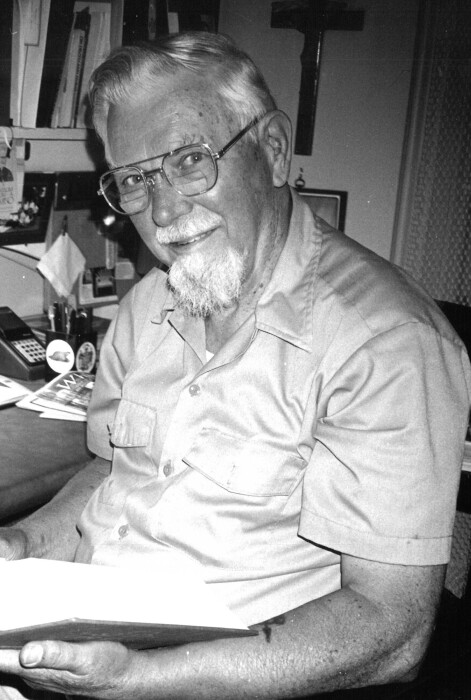 Sylvester was born on June 1, 1924, in Fond du Lac and adopted by William and Edna Regan and baptized at St. Joseph Parish in Waupun.  He lived a very full and interesting life.  Sylvester was raised in Sheboygan Falls.  He attended schools there and graduated from Sheboygan Falls High School in 1942.  He entered the US Marine Corps in 1943 and served in the South Pacific theatre.  Sylvester was wounded in Guam and subsequently received the Purple Heart.  He was honorably discharged for medical reasons on October 5, 1945.

Sylvester met and married Eleanora M. Raymond at St. Mary’s Church on August 3, 1946, which union produced nine sons and a lifetime of memories and stories.  The family moved to the Green Bay area, where he worked for many years as a heavy equipment operator.  When the opportunity arose, he applied for a job with the Industrial Commission as a Safety Specialist.  Selected as one of 30 from a field on 560 applicants, he began a 23-year career with the state as building inspector, factory inspector, construction inspector, accident investigator, and OSHA safety consultant.

Very active all his life in his church, he was accepted into the first class of men to be ordained as deacons.  Thus, he had received all seven sacraments of the church.  He was also very much involved, both as a youth and as an adult leader in the Boy Scout program.

Having learned as a youngster to whittle, he pursued that hobby all his life.  He taught many groups of beginners to have fun whittling.  As his vision faded, he put that course in writing, Whittling for Beginners.  Sold throughout the country, it is now in its second printing.  Also, in retirement he joined the local writer’s group and Wisconsin Writers Association, and the Wisconsin Fellowship of Poets.  As blindness took over, he became chaplain of the Wisconsin region of the Blinded Veterans Association.

The staff of the Wenig Funeral Home of Sheboygan Falls (920-467-3431) is assisting the Regan family with arrangements.

To order memorial trees or send flowers to the family in memory of Sylvester Regan, please visit our flower store.