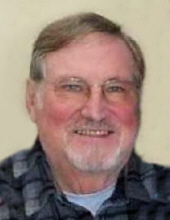 Thomas Carl Reinke, 78, of Sheboygan Falls, passed away peacefully on Wednesday, March 6, 2019, at Sharon S. Richardson Community Hospice.Tom was born on April 13, 1940, in the Town of Rhine, to the late Alyard and Lucille (Klokow) Reinke.  He attended one room, Victory Grade School, and graduated from Plymouth High School in 1958.  Tom served in the Armed Services for two years and was stationed in Germany.  During that time, he met and married Karin Binner.  They would be married 54 years on March 26th.Tom worked on the family farm, Stokley Van Camp, Johnsonville Meats, and retired from Tecumseh in Sheboygan Falls after 43 years.  Tom liked being outdoors.  He enjoyed fishing, hunting, snowmobiling, camping, and just being in his yard.  He also enjoyed canning pickles and tomato juice.Tom is survived by his wife, Karin; his son, Timothy of Sheboygan; his daughter, Regina (Alvin) Schleicher; two precious grandchildren, Abigail and Tony Schleicher, all of rural Sheboygan Falls; one sister, Diane Voelker, one niece, Paula (Nathan Curtis) Voelker; one nephew, Brian (Friend, Chris Padgett) Voelker; sister-in-law, Helga Binner; brother-in-law, Alfred Binner; and his faithful dog, Bear.Tom was preceded in death by his parents, mother and father-in-law, Rudy and Maria Binner, and his brother-in-law, Horst Binner.Funeral services to celebrate Tom's life will be held at 2:00 pm on Friday, March 8, 2019, at the Wenig Funeral Home in Sheboygan Falls.  Relatives and friends may gather at the funeral home from 12:00 pm until the time of the service at 2:00 pm.  Burial will take place at Sheboygan Falls Cemetery.Tom's family would like to express their appreciation to all who assisted in Tom's care these past months - a special thank you to the staff of the Sharon S. Richardson Community Hospice for their gracious and compassionate care. A gift may be made in his name to Sharon S. Richardson Community Hospice. For online condolences and additional information please visit www.wenigfh.com The staff of the Wenig Funeral Home of Sheboygan Falls (920-467-3431) is assisting Tom's family with arrangements.

To order memorial trees or send flowers to the family in memory of Thomas Reinke, please visit our flower store.