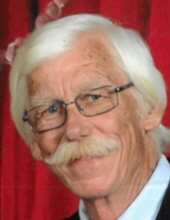 Wayne L. Mentink, 73, of Kiel (formerly of Corona, CA) died unexpectedly on Friday, February 5, 2021 at Ascension Calumet Hospital. Wayne, the eldest of seven children, was born on April 19, 1947 in Sheboygan to George and Jean (DeMaster) Mentink.  After graduating from Oostburg High School in 1965, Wayne completed an associate degree at Lakeshore Technical College and then enrolled at UW-Platteville.  While pursuing a degree in civil engineering, Wayne was drafted and enlisted into the U.S. Air Force.  Three weeks before he left for training, he married Janice Huibregtse at Gibbsville Reformed Church on April 18, 1969.   Wayne served in the U.S. Air Force from 1969 through 1973 at the Vandenburg Air Force Base in Lompoc, California.  After an honorable discharge, Wayne worked as a carpenter for Pohls Construction, a high-end residential and commercial construction company located in Solvang, California.  Building the outdoor Solvang Festival Theatre was one of the largest projects Wayne completed with Erling, his best friend and later owner of Pohls Construction.  Wayne then started his engineering career for Gentry/Rados building wastewater treatment plants.  After living in Solvang, the Danish capital of America, for five years, Wayne and Jan moved 200 miles southeast to Corona, California where they made a home for 38 years.  Wayne continued with Gentry as an engineer responsible for field startup projects, worked at Johnson Controls, and then ended his career at Orange County where he enjoyed managing startup projects as well as programming controllers for wastewater treatment plants for over 21 years.  In 2015, Wayne retired and he and Jan moved back to Wisconsin to be closer to family and friends. Wayne was known for being a collector of classic cars and model railway trains.  After a 1934 Ford pickup, the 1962 Oldsmobile Starfire was a favorite, filling his garage and driveway with four at one point.  Similarly, his collection of LGB G-Scale model trains grew to 150 engines.  Family and friends who visited Wayne and Jan in Corona were treated to extravagant indoor and outdoor train layouts and Wayne came to be known as "Choo Choo Wayne" by his great-nephews and great-nieces.  In addition to collecting cars and trains, Wayne enjoyed hunting with his favorite Welsh springer spaniel, Diawlbach, as well as traveling abroad.  His favorite adventures with Jan were to Nashville attending Fan Fair Week, Canada, Rio de Janeiro, Hong Kong, Austria, and many other European countries.  Wayne was also an active member of the Corona Elks Lodge #2045 club for 40 years. Wayne is survived by his wife of 51 years, Jan; his mother, Jean Mentink; four sisters, Dianne (James) VerGowe of Sheboygan Falls, Donna Dortman of Sheboygan, Janice (Richard) Heinen of Oostburg, and Vicki Mentink of Sheboygan; two brothers, Wendell (Joan) Mentink and Philip (Faye) Mentink, both of Oostburg.  Wayne is also survived by two sisters-in-law Beverly (Wayne) Hilbelink of Delavan and Lynn (Wayne) Brasser of Hingham, 20 nieces and nephews, and numerous great-nieces and great-nephews. Wayne was preceded in death by his father, George Mentink; in-laws, Clarence and Bernice Huibregtse; and brothers-in-law, Rodney Huibregtse, Roland Dulmes, Barry (Judy) Huibregtse, and John Dortman. A funeral service with military honors to celebrate Wayne's life will be held at Gibbsville Reformed Church (N3145 WI-32, Sheboygan Falls) on Thursday, February 11, 2021 at 2:00 pm. If unable to attend, all are welcome to join via livestream by visiting www.wenig.live/WayneMentink . A private burial will be held at Gibbsville Cemetery.  Family and friends may greet the family at Gibbsville Reformed Church from 12:00 pm until the time of service at 2:00 pm. A memorial fund is being established in Wayne's name to support various charities. For online condolences and additional information please visit www.wenigfuneralhome.com . The staff of the Wenig Funeral Home of Oostburg (920-564-2771) is assisting the Mentink family with arrangements.

Please click here to view the video tribute
To order memorial trees or send flowers to the family in memory of Wayne Mentink, please visit our flower store.