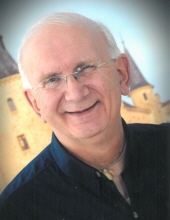 William "Bill" K. Lamberton, 74, a resident of Kohler, WI, died peacefully Thursday afternoon, May 10, 2018.  He was surrounded by his wife, daughters, and eldest granddaughter at Sharon S. Richardson Community Hospice in Sheboygan Falls, WI.Bill was born on January 19, 1944, in Waukesha, WI to the late Reynold and Gwendolyn (Wensel) Lamberton. He married Melody Henke on June 15, 1968.  Bill enlisted in the US Navy in 1963 and served on active duty until 1967.  He retired from the U.S. Navy Reserve after 30 years of service.Bill had a variety of jobs over the years ranging from his first job as a paperboy for the Milwaukee Journal to his retirement from Wal-Mart in December 2011.  After retirement he enjoyed traveling with his wife, singing with the Barbershop Harmony Society and attending "Very Important Lutherans" activities at First United Lutheran Church.Bill is survived by his wife, Melody; his two daughters, Lisa Lamberton and Nicole (Jesse) Taylor; five grandchildren, Ashly (Phil) White, Jay, Jamari, Jordan, and Jasmine Taylor; one brother, Peter (Brenda) Lamberton; his dogs, Tivo and Copper; and his birds, Boomer and Archie.  Bill is further survived by many brothers-in-law and sisters-in-law, nieces, and nephews.A memorial gathering for Bill will be held at 6:00 pm on Tuesday, May 15, 2018, at First United Lutheran Church in Sheboygan with Rev. Todd Smith officiating followed by military honors.Relatives and friends may gather at the church from 4:00 pm until the time of the service at 6:00 pm.A memorial fund has been established in Bill's name for First United Lutheran Church and Sharon S. Richardson Community Hospice.For online condolences and additional information please visit www.wenigfh.com The staff of the Wenig Funeral Home of Sheboygan Falls (920-467-3431) is assisting Bill's family with arrangements.

To order memorial trees or send flowers to the family in memory of William Lamberton, please visit our flower store.