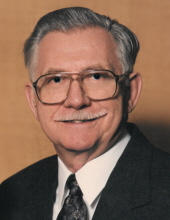 William M. Stalter, Sr., 95, of Sheboygan Falls, passed away on Sunday, December 2, 2018, at Pine Haven Christian Home in Oostburg. William was born on October 20, 1923, in Sheboygan, to Matthew and Martha (Schultz) Stalter. He was a graduate of North High School. After high school, William served his country in the U.S. Army in World War II, in the 579 Battalion, as an anti-aircraft gunner, on a half track in the Pacific. On February 24, 1945, William married Delores Jurss in El Paso, Texas. William worked as a laborer at Armor Leather until his retirement. William was a member of Blessed Trinity Parish as well as a lifelong member of the VFW, and a proud fourth-degree member in the Knights of Columbus. In his free time, he enjoyed hunting, fishing, trapping, and wood carving. William is survived by his two daughters, Jan Martens, and Sandy Garrigan; son, Bill Stalter, Jr.; three grandchildren, Daniel (Sarah) Garrigan, Michael Stalter, Patrick Stalter; two great-grandchildren, a brother, Albert Stalter; and other nieces, and nephews. William was preceded in death by his loving wife, Delores Stalter; parents; two brothers; six sisters; daughter-in-law, Judith Stalter; and his sweetie. A Mass of Christian Burial to celebrate William's life will be held on Thursday, December 6, 2018, at Blessed Trinity Parish in Sheboygan Falls. Burial will take place at Holy Cross Cemetery in Sheboygan.Relatives and friends may greet the family at Blessed Trinity Parish in Sheboygan Falls on Thursday, from 10:00 am until the time of Mass at 11:30 am. For online condolences and additional information please visit www.wenigfh.com. The Wenig Funeral Home of Sheboygan Falls (920-467-3431) is serving the Stalter family with arrangements.

To order memorial trees or send flowers to the family in memory of William Stalter, Sr., please visit our flower store.